Knit stitch on a Knitting loom 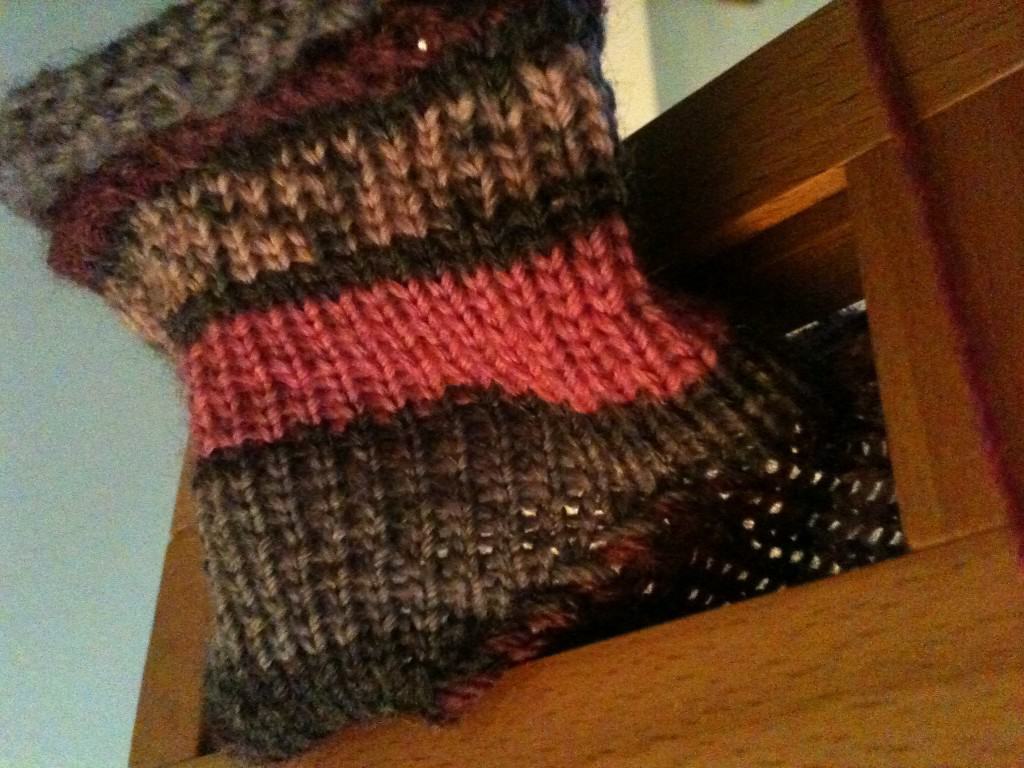 sock made with the flat knit stitch

The Knit stitch is a simple stockinette stitch used commonly in knitting.  It creates a beautiful flat fabric where the stitches look like “v”s.  A stockinette stitch naturally it will curl on the ends and edges unless a purl, that naturally curls the opposite way, is used.

There are 3 ways to make a loom knit stitch:

1. The first is to hold the working yarn above the provious stitch on the peg, lift the bottom loop over the top and you have created a FLAT KNIT stitch (called F or FK also).  This creates a tighter stitch. You can also take your loom pick and tug on that stitch, after creating it, to loosen it up.  This will imitate a knit stitch as well but will keep you tension easier to knit over the next time and if done consistently will look like a U-WRAP or REVERSE PURL type of traditional knit stitch.

2. The second is to wrap the peg around the front and all the way to the back of the peg loosely.  Knit over and now you will have a nice tension U-KNIT stitch.

3. The third type takes more time, but if you always seem to be a tight knitter, you may want to try the REVERSE PURL.  It is really called a knit stitch because it produces the knit stitch evenly every time.  It is also opposite looking to the loom knit purl stitch. Place the working yarn on top of the previous stitch.  With your loom pick pull the working yarn on top downward through the previous stitch from the front of the peg making a new loop.  Hold the new loop and take the old one off the loom.  now place the new loop on the peg and slightly pull the access yarn to snug up the stitch (but not tight!). Please watch the video below for demonstration.

Because of the variety of designers and beginners, patterns may not be standardized. Please read the directions in a loom knit pattern to see if the designer calls out the main knit stitch used.  Some will write “Use a(n) _____ stitch for all knit stitches unless otherwise directed” or a similar language. If translating a needle pattern to the loom please use the U knit stitch or a flat knit and then loosening the stitch a bit with your loom pick or use.  Again, both of these will create a traditional knit stitch without all the extra work of the “reverse purl” or Knit where you take it on and off the loom. (see video links) Most needle patterns with use the smoother knit stitch to create the “v”, use the e-wrap stitch for when the needle pattern calls for k1tbl, knit through the back loop or a twisted knit.

Below are some videos on loom KNIT stitches for single knit (flat panel) knitting as well as double.  Also a video on comparing stitches in a swatch is below we hope you will find handy.

Flat Knit (FK): Bring working yarn to the front of the peg and lay above loop. Lift bottom loop over top working yarn. This makes a tight knit stitch.

U-Wrap Knit (UK): Bring working yarn to the front of the peg, wrap above the loop and around the back of same peg as if making a “U” shape with the working yarn. Lift bottom loop over top working yarn. This makes a looser knit stitch than FK.

Knit (K): Bring working yarn to the front of the peg and above the loop. Insert loom tool below loop on peg and pull working yarn down to make a loop. Pull upward to release the old loop off peg. Place the knit loop on empty peg. Gently tug working yarn on loops tighten slack on stitch. This is a traditional or true knit stitch and closest form to a needle version.

E-wrap Knit (EK or also EW): Bring working yarn around back of peg, between current and next peg to the front and back around between current peg and previous peg. The forms a loop around peg in the same of a cursive “e”.  to work the stitch lift bottom loop over top loop. The fabric with be a twisted stitch resembling more of a “y” shape with a little more yarn.  It doesn’t lay flat like a knit stitch that looks like a “v” shape, instead it overlaps slightly.  This also creates a stretchier stitch. In needles it is also referred to as tbl or through back loop. Directional knitting – Working in the same direction, as in the round, the stitches will all line up uniformly.  Working back and forth, as a flat panel, every other row will screw the opposite direction. This is usually only an issue when working both in the round and then a flat panel in the same project such as fingerless mitts for example.  Solution: Every other row use a Half Hitch (HH) instead of an EK and work the bottom loop over the top as you would with an EK.