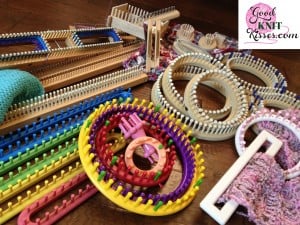 Loom Knitting videos are what GoodKnit Kisses started with as a passion to help other loom knitters.  We found that the instructions in the loom knits were often hard to understand. We hope to help make things easier to learn through our style of loom knitting videos. Thank you for watching and thank you to our loyal subscribers and viewers.  Your encouragement and photos sent keep up inspired!

Please feel free to create your own playlist of Loom Knitting Videos yourself from these or bookmark one of ours.  They do come in handy for quick reference.  As always if you have a need please let us know.

If there is a technique or stitch video your would like to see please use our contact form.  We would be happy to look into making new loom knitting videos as they arise.  We will not film someone else’s pattern. However, but if they would like a new stitch or technique clarified or their own made into a video to help others, we would be happy to assist.  Thank you!

These loom knitting videos help you get your yarn onto the loom.  This technique is called Casting On, Cast-on or CO

Loom Knit Cast On: Half Hitch Cast On or Backwards loop.

Loom Knit Cast On: Yarn Over or Double Ewrap.

Loom Knit Cast On: Cable Cast On (braided on right side).

Loom Knit: Finish Cast on edge of scarf or panel.

Loom Knit: Easy Chain Cast On with crochet hook was crochet cast on by error.

These videos help you get your project off the loom.  This technique is called Binding Off, Bind-off or BO. Sometimes Binding off is referred to as casting off.

Loom Knit: Stretchy Bind Off no crochet or needle.

Stretchy Bind Off or Cast off loom knitting NO SEW.

Loom Knitting Videos: How to Basic Bind Off.

Loom Knitting Videos: How to Decrease Bind Off.

Loom Knit cast off Triple Rib Stitch bind off. This is a more rigid older bind-off Kristen used to used.  She prefers the Stretchy Bind off for this stitch currently.

Loom Knit cast off a twisted knit or single rib stitch. This is double knit

Stitches in loom knitting can vary in names; we have tried to write alternate names in the titles, as well as in the video, to address the multiple names for a stitch. If you don’t see a stitch listed in “Stitches” please look for it in “Stitch Patterns” or contact us if you still cannot find it.

Loom Knit: P2tog or Purl 2 Together and YO or Yarn Over.

Stitches in loom knitting can vary in names; we have tried to write alternate names in the titles, as well as in the video, to address the multiple names for a stitch. If you don’t see a stitch listed in “Stitches Patterns” please look for it in “Stitches” or contact us if you still cannot find it. We are also looking to expand this category.  Please contact us if you would like to knit up swatches.

These videos vary from calculations of formulas to set up your loom, to tips for general use or just discussion blogs.

Finish and Weave in drawstring of hat.

How to Connect Granny Rounds by Single Crochet.

Crafts: How to Make an easy PomPom.

Stitch or Sew: Loom Knit Panels Together Invisible Seam for Blanket or scarf.

Increase by 1 and Half Stitch or Cleaner garter edge purl.

Loom Knit: How to Change Colors.

Loom Knit: i Cord on a Spool Loom.

The following loom knitting videos are patterns set to video.  Play, pause and rewind as needed.  We are much more patient doing things over and over on video at 3 am than regular teachers! LOL!

Clapotis Loom Along Section 1 of 5.

Clapotis Loom Along Section 2 of 5.

Clapotis Loom Along Section 3 of 5.

Clapotis Loom Along Section 4 of 5.

Clapotis Loom Along Section 5 of 5.

Dew Drop Shawl loom along pattern on the AllnOne.

Granny Round on 24 peg loom.

Loom Along: How to Loom Knit a Lacy Infinity Scarf on Martha Stewart Loom.

How to Loom Knit a Hat – Beginner (baby beanie).

Gifts: How to Loom Knit Ornaments or a Decorative Ball.

How to Loom Knit: Visor for Newsboy Hat 48 peg loom.

These videos are products that we have reviewed. We try to note many details about the product and test it out in the most used ways so you have have a better understanding if buying online.  We know it’s hard to decide if something is really worth the buy or not when you are limited to no craft stores in your area.  Thank you for watching and trusting us.  If we think the product is bad, or the customer service won’t stand behind it, we will not even post the review.  This does not mean these are commercials or mean to say buy everything we review; but it does mean we will tell you all we can so you can decide if its the right product for YOU.  And remember, we are NOT paid by companies for these reviews.  Many are either sent are way or GoodKnit Kisses has purchased it outright. Thanks!

Loom Review: All n One from Authentic Knitting Board or All-n-One.

Martha Stewart Loom Yarn talk: What Yarn do I use? (use this for the Knitting Board adjustable Hat loom as well as the small gauge part of the AllnOne)