Picot edge detail is so pretty I wanted it for my new cowl made on the Martha Stewart Knitting Loom.  But I’ve never seen this bind off done except knitting needles.  There is a technique to cast on a picot edge but not to cast off or bind off.  SO after I discovered how to do it I wanted to show my friends, YOU, how to make your own.  Below you’ll see the cowl I made and the YouTube video on how to make it yourself.  The video is long and the process does take a few extra minutes but it worth it for the end result.  So sit back and learn how to loom knit the Picot Edge Bind Off with me. 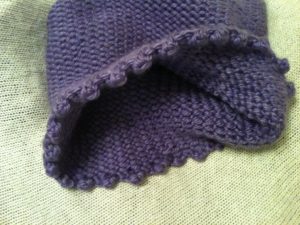 Mini Picot-Boo Cowl. Very warm, not airy. Great for outdoors & a hood. Not for fashion indoors unless you are always the cold one!
(Photo by Kristen Mangus of model Crystal Clark)

I LOVE the look of this cowl! This would be PERFECT for our WYOMING wind and weather! ♥

I LOVE the look of this cowl! This would be PERFECT for our WYOMING wind and weather! ♥