Thanks to KB Looms for for sponsoring this pattern and tutorial.  I also want to thank them for providing the fantastic set of Premium Chunky Round Looms used for this pattern design, but also the extra sets that I was able to give away during the Facebook Live unboxing.

My latest pattern is a throwback to a classic Bakers Boy cap with a trendy twist. This Bakers Boy Cap features a short soft brim with a bobble accent to mimic the strap. The sides and back of the brim are ribbed vertically while horizontal bands feature a series of eyelets for a unique textured lace look. 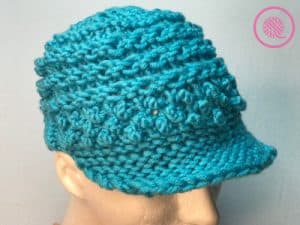 The Bakers Boy Cap rests above the ears and is meant to be worn resting on the head rather than pulled down like a beanie. The top is flat with a special double decrease on the crown that uses two different looms.  Don’t worry it’s actually very easy to do.  You’ll see when you watch the full video tutorial below.

Speaking of looms, have you heard about the new looms in town?  If not, you’d better sit down because this news is BIG! 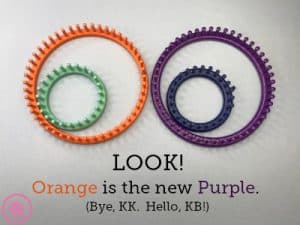 Yes!  Finally!  They heard us!  KB Looms has released their Premium Chunky Round Loom Set in 5/8″ gauge (affiliate link).  It includes a 48-peg loom.  This is identical in gauge and size to the coveted Knifty Knitter purple hat loom.  You know the one that is discontinued and sells on Ebay for roughly a gazillion dollars. 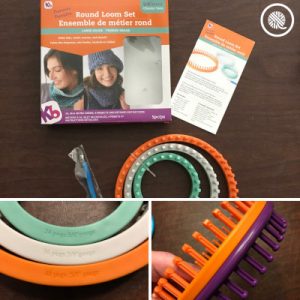 The set includes 3 looms in 5/8″ (large) gauge with 24, 36 and 48 pegs.  Oh, and the gauge and peg count are marked on the bottom of the loom.  Ditch the sharpies and the measuring tape because it’s printed on the loom!  See my full Facebook Live unboxing below as I show you the new set plus the new Baby Knit Loom set from KB.

For a downloadable PDF of this pattern click here:

2 Looms – ⅝” Large Gauge (LG) round looms. One 24 peg and one 48 peg loom. Knitting Board 48 peg (orange) and 24 peg (light green) from Premium Chunky Round Loom set (affiliate link) were used in sample.

HH = Half Hitch; a thumb cast on to increase, looks much like an upside down Ewrap.  Hold yarn out and twist into an Ewrap circle. Turn over so it lays flat on next empty peg.  Pull working yarn to tighten. Working yarn should be coming out from bottom of wrap.

KO = Knit Over pegs with more than one loop so one loop remains.

K2tog = Knit 2 together (Decrease): Place two stitches on one peg and knit over both at same time. Lean or slant of this decrease does not matter, just be consistent.

MB = Make Bobble: EW and knit off 5 times on the same peg. Then reach behind peg, pick up stitch from previous row below and place on peg. Work bottom loop over top loop. This completes one Bobble.

P2tog = Purl 2 together (Decrease): Place two stitches on the same peg and purl both at same time. Lean or slant of this decrease does not matter, just be consistent.

Visor is worked as a flat panel then additional stitches are cast on.  The rest of the hat is worked in the round.

The hat features a flat, decreased crown that is worked on TWO looms.  After the first decrease the entire project is transferred from the 48-peg loom to the 24-peg loom to finish. 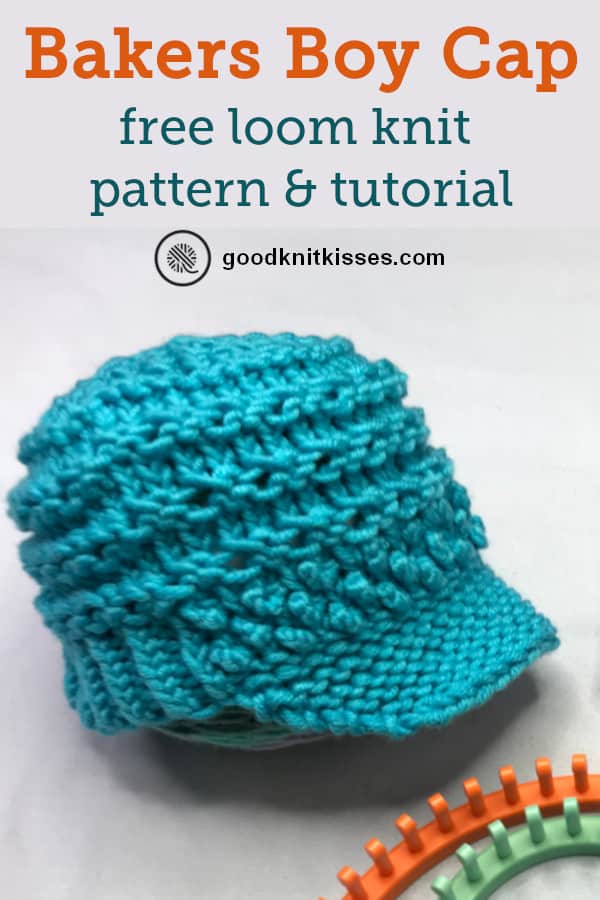 Connect hat in round:

Begin working in the round at peg 1 working clockwise. 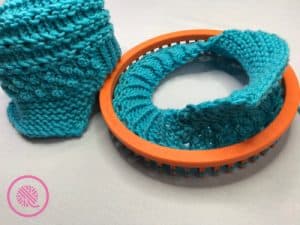 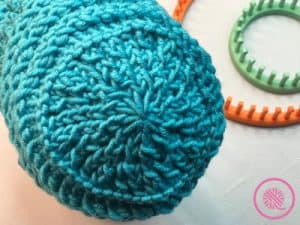 Note: Uwrap (UK) knit all stitches in crown staring at Round 25. EK works but will be a more open stitchwork.

Decrease 1:
Divide loom into sections of 6 pegs (8 sections); place stitch markers to mark 1st peg in each section of 6 pegs.

Use scrap yarn to weave through remaining 24 loops. Take off the 48-peg loom to transfer to 24-peg loom and take out scrap yarn; pull out slack if needed from previous row, make sure not pulling too tight. Mark peg 1. Divide loom into sections of 6 pegs (4 sections); place stitch markers to mark 1st peg in each section of 6 pegs.

BIND OFF: Drawstring or Gathered Bind off. Secure end and weave in tails.

Learn How to Knit a Colorful Striped Mitered Square October 17, 2020

How to Knit a Perfect Mitered Square for Beginners October 10, 2020