My heart is bursting with joy!  There’s a new pattern out there, but it’s not just any old pattern.  This one is special.  The Easy Going Loom Knit Hat was a collaboration in the truest sense of the word.  It all began back in February when I was demoing the textured stitch for the Easy Going Knit Sweater.

One of our own GKK community, Robin Sperry, saw the broadcast and decided to use that stitch pattern in a hat.  When she sent me the pictures of the hat I was blown away at how wonderful it looked and we began talking about the pattern.  I also contacted Yarnspirations since the hat was the perfect accessory to go with their sweater pattern.  It has been months and months of discussion and pattern testing, but the day is here.

This is huge!  Like sliced bread huge.  I’ve been a long-time advocate for our loom knitting community and am thrilled that we are being heard and recognized.  This is exactly what I’ve always wanted for GKK:  our group working together and inspiring each other to influence the craft world. 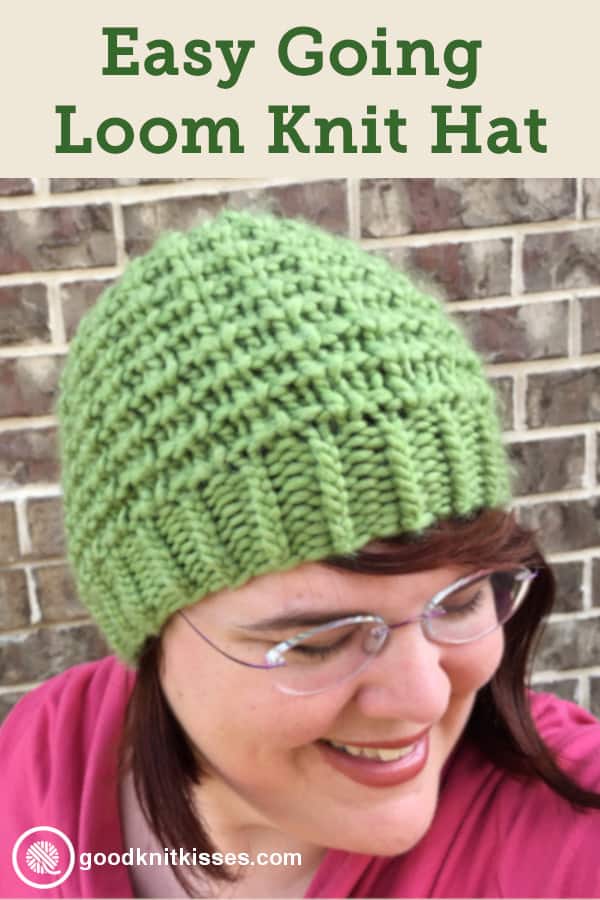 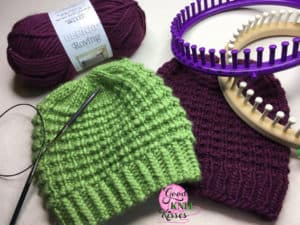 (NOTE: The pattern PDF currently lists Patons Classic Wool Roving as the yarn, but that is being corrected.)

5/8″ gauge loom* with 48 pegs.  This is either the Knifty Knitter purple hat loom or the Cindwood equivalent.

Skills learned in this tutorial:

Joining in the round

SlwyifP – slip stitch with yarn in front of peg

P1 below – purl one stitch from the row below

I started with the longtail cast on.  If you’ve never tried it before it’s easy to do and gives a beautiful stretchy edge that is great for hats.  Then I’ll show you how to join in the round.  You CAN just continue working around, but there is a method that will give you smoother join.  Next we’ll work the ribbing.  I’ve got two different hat to show how the look changes depending on where you line up the ribbing. 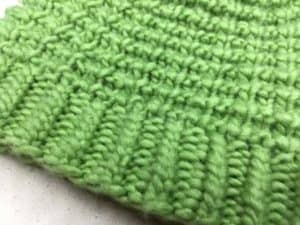 No, there’s no toddler at the keyboard.  And no, I’m not using bad language because my yarn is all tangled.  That’s a new abbreviation for this pattern!  It’s impossible to pronounce but so easy to work.  It means: slip stitch with yarn in front of peg.  Just lay your working yarn in front of the peg and move on.  That’s it.  You don’t have to do anything else.  You did something special and unique on the loom to get set up for the next row.  The following row uses a P1below or Purl into the stitch below.  On needles this means you are picking up the stitch you worked on the row before.  This is much easier on the loom because rather than knit the stitch on the previous row and put it back on the peg when we get to the P1below we can purl both loops together and have the exact same result.  I love it! 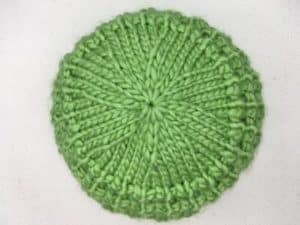 To top it all off…

Lastly, work a decreased crown using evenly spaced K2tog stitches to give you a perfect fit.  I love the way this crown came out. This method will work on any hat you make on this loom.  That’s it!  Just weave in a few ends and it’s ready to wear.

I know many of you have asked for more of the gorgeous needle knit patterns we’ve seen this year from Yarnspirations be converted to the loom and I do hear you.  Let’s work together and show the world everything we can do on a loom!

Can this be made on a 41 peg chunky loom or a fine gauge KB loom?

Hi Kristen! I refer back to this pattern more than any i’ve done! Thank you for the video! I’m a visual learner so this helps me out tremendously! Thank you! Thank you!💕

Is there any super reason you switched to Bernet from Patron?

Is there any super reason you switched to Bernet from Patron?

I found the pattern on the Yarn Inspiration website. What I am not pleased with is the price! It is over $8.00. This is a ripoff. Many many patterns on Ravelry are less expensive. Kristen apparently worked for a very long time getting Loom Knitting recognized by Yarn Inspiration and when she FINALLY got them to put a pattern on their website, it is not cheap for a hat. Maybe a blanket, and as much as I would like to make the hat, I refuse to pay that kind of price for a pattern for a hat. Sorry, Kristen, you went to all the trouble you did getting Yarn Inspiration to work with you. Maybe in the future, they will be more "kind" to the loom knitting world as more patterns are added. I am also going to leave a message with their website about the price.