Chevron Hat you may have seen, but not this one!  New to the GoodKnit Kisses Blog is Michelle Irizarry.  Her Light and Lacey Chevron Hat is unique and breezy.  Design inspired by Faith Schmidt.  We hope you enjoy, thanks Michelle! – Kristen Mangus

The Light and Lacey Chevron Hat was inspired by Faith Schmidt’s “Loom Knit Light and Lacey Loom Scarf” which can be found on Ravelry. http://www.ravelry.com/patterns/library/loom-knit-light-and-lacey-loom-scarf. I had loom knit the scarf and loved how light and airy it turned out. The Chevron Hat, being light and lacey, is just perfect for the local Florida climate. I was looking for a loom knit chevron hat that would complement it but could not find a pattern in a similar style. I then noticed that the scarf had a repeat pattern based on multiples of 10 that could be easily adapted to the round and that is how this chevron hat came to be.

Authentic Knitting Board All-n-One Loom was used for the sample. Sample and step by step instructions detailed below are for a 70 peg configuration.

Another similar small gauge loom with at least 70 pegs can be used.

Since the chevron hat pattern is based on multiples of 10, the same idea could be adapted to a 40 peg (or even 36 or 41 peg) large gauge Knifty Knitter type loom. Diagrams to help with the Chevron Lace pattern for various peg configurations are included in this pdf file. 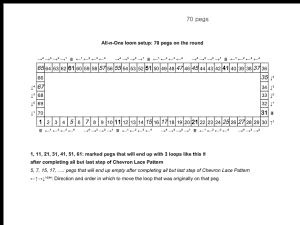 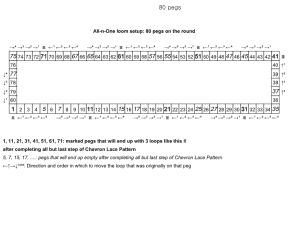 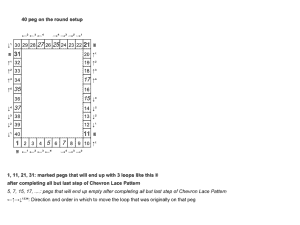 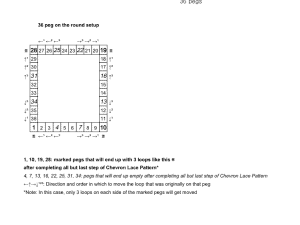 Note: Using a self-striping yarn or changing the yarn color every few rows will accentuate the chevron “zig zag” pattern.

Cast on 70 pegs using your favorite method. I used a Figure 8 cast-on since I like the braided look on the edge. Note: The edge will tend to curl but steam blocking will fix it.

The pattern basically consists of moving the 4 loops on each side of each marked peg towards the marked peg.

Round 1: Knit all pegs

Round 2: Knit all pegs

Round 4: Knit all pegs

Round 5: Knit all pegs

Repeat rounds 3-5: ten additional times or until the hat measures approximately  7 inches long (from peak of cast on edge to top). 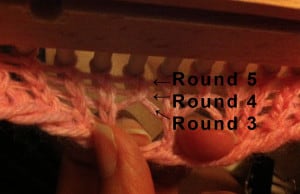 Pull on the yarn tight to close to hole at the top of the hat, move the yarn to the inside of the hat and make a knot. 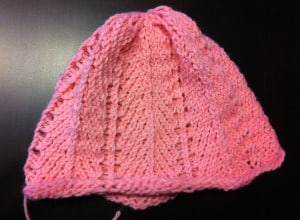 Light and Lacey Chevron Hat prior to blocking

Finish:  Steam block the hat to better define the chevron pattern (pin down each peak for better definition) and prevent  the edge from rolling. This will stretch the hat somewhat so take that into account when deciding how long to make your hat. The sample stretched about 15-20% after steam blocking (to about 8.5 inches long from peak of cast on edge to top).

Weave the ends in. 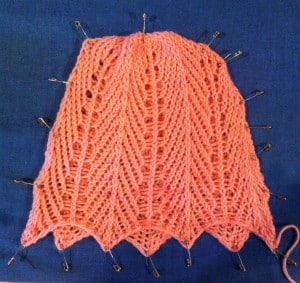 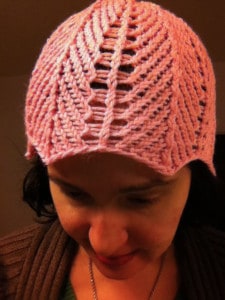 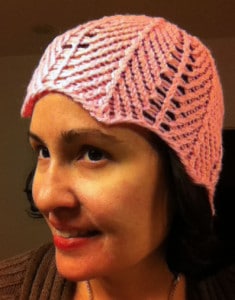 Michelle M. Irizarry is a self-taught fine art painter who also dabbles in knitting and crochet. Her fine art work can be found at: www.facebook.com/mirizacom.

Michelle would like to thank Faith Schmidt for the initial inspiration pattern before the Light and Lacey Chevron Hat. Faith’s blog “Distracted Knits” can be found here:
http://distractedknits.weebly.com/

Editor’s notes: We hope you enjoy making the Light and Lacey Chevron Hat.  Please note that Kristen has not tested the pattern.  You may want to knit longer or use more pegs for your size.  Also it would be cute to rotate the peak to show in the middle of the forehead like a “widows’s peak”!  (A special thank you to our editor Carol Lilydot!!)