Can you feel it?  It’s barely there, but there is just a hint of crispness to the air first thing in the morning.  I know it’s technically still summer, but fall is just around the corner.  I can’t wait until the thermometer finally drops below sweltering so I can finally wear my new mitts.  My Chic Fingerless Mitts are the perfect blend of stylish and fun. 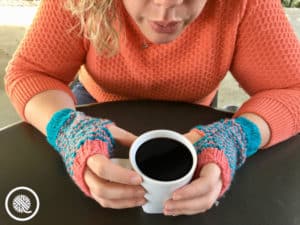 A few months back I was invited to take part in Marly Bird’s Chic Sheep Designer Blog Tour.  I’d already been using this incredibly soft yarn so I knew I wanted to be a part of the fun.

Then the struggle began.  What should I make?  Scarf, cowl, hat, shawl?  Aha, I know… fingerless mitts. Mitts are perfect for crisp fall days. And they insulate your hand from a steaming hot Pumpkin Spice Latte making them an essential fall accessory.  Then I had to decide if I should design a pattern for the loom or for needles?  I couldn’t decide so I did BOTH.

Yes!  Chic Fingerless Mitts can be worked on either knitting needles or a knitting loom in 3 different sizes.  The mitts are worked in the round with solid ribbed cuffs, easy thumb opening and distinctive zig-zag striping.   This easy pattern knits up quickly so it’s great for gifting. 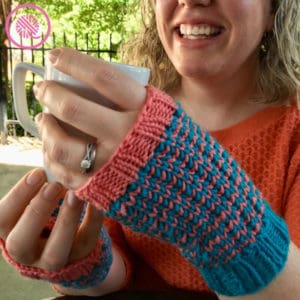 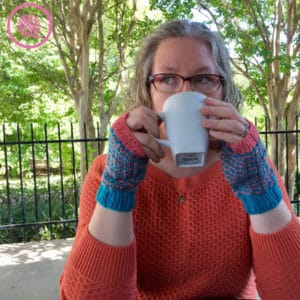 Thanks to Summer Cromartie for being an amazing model.  You’re the best!

Needle knitters, scroll on down for the free pattern and tutorial videos for right and left handers.

Loom knitters, click here to go the loom knit version with tutorial videos showing the pattern knit both clockwise and counter clockwise on the loom. 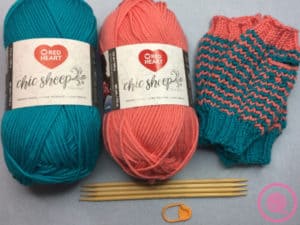 Bind off in pattern loosely. Weave in all ends. 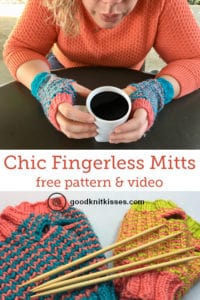