I recently made a needle knit tutorial for the Brioche Accent Knit Cowl from Yarnspirations.  The timing on this project could not be any more amazing.  The cowl is a needle knit pattern using two-color brioche double knitting in the round.  All right, loom knitters, it’s quiz time.

When you hear double knitting in the round does it remind you of anything?

Of course!  KB just released their new Rotating Double Knit Loom!!  This is the perfect project for the new loom.  I think I got goosebumps.  I know many of you have been asking for some video tutorials using the new loom and I happy to make your dreams come true. 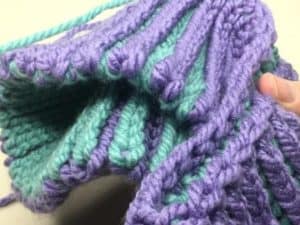 This pattern is inspired by the Brioche Accent Knit Cowl from Yarnspirations.

Scrap yarn in a contrasting color to be used as anchor.

(Currently this is the ONLY loom that can be used for this pattern.)

Skills demonstrated in this tutorial

Choose your cast on …

Place slip knot on first peg of OUTSIDE loom.  Wrap around the first peg of the INSIDE loom in a U shape.  Do NOT Ewrap the pegs for this cast on!  Bring working yarn back to front and wrap Peg 2 of the OUTSIDE loom. Continue around loom wrapping the pegs in order from outside to inside.  Note: Your wrapped loom should look like the yarn snakes around the pegs in a continuous S shape.  Your yarn should not cross over itself.

Using Color A and one of methods listed above cast on all pegs.  Leave the working yarn between the first and last pegs of the loom.  Do not cut.

Switch to Color B by placing a slip knot on Peg 1 of the OUTSIDE loom and laying the yarn tail across the INSIDE of cast on stitches between the looms.  The yarn tail will be hidden inside the fabric.

Round 1: With Color B wrap the loom as for stockinette stitch.*  Knit over all stitches on the inside loom.

**Round 2: With Color A wrap the loom as for stockinette stitch.*  Knit 2 bottom loops over the top loop of OUTSIDE loom.

Round 3: With Color B wrap the loom as for stockinette stitch.  Knit 2 bottom loops over the top loop of INSIDE loom.

Repeat from ** until you reach your desired length ending after Round 2.  Tug anchor yarn as needed to bring your work down between the looms.  The cowl shown in the video is 6″ wide, but you can continue to make a wider cowl if desired.

Prepare the bind off by knitting the bottom loop over the top loop on the INSIDE loom.  Cut Color B leaving a 6″ yarn tail.  Lay the yarn tail along the side of the loom to enclose it.

Once all stitches are bound off you may want to release the outside loom from the stand to take the cowl off.

Connect the first and last stitches of the bind off edge using the yarn tail and a tapestry needle.

Remove the anchor yarn and weave in yarn tails.

I hope you enjoyed this tutorial as much as I did!

For more loom knit conversions subscribe to my YouTube Channel or sign up to receive the GKK newsletter.  To see this and other great needle patterns for inspirations please check out Yarnspirations.com.

About Kristen Mangus
Kristen is a multi-talented entrepreneur with a heart as big as Texas. She is the owner of GoodKnit Kisses whose mission is to inspire, encourage and empower people through education and design. She’s built a large and loyal online community of followers by sharing her personal passion for loom knitting, needle knitting, crochet and all things creative through YouTube tutorials, Facebook live broadcasts, blogs and pattern design. Her vision is to leave an inspired crafting world for future generations that continues to teach and reach others. She and her husband, John, have three amazing kids.