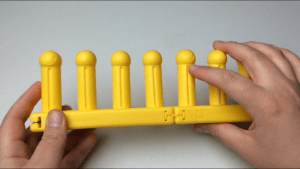 The Five Stitch Blanket Pattern on the knitting loom is here for that Jumbo and Super Bulky yarn in your stash!

A version of the Ten Stitch Blanket originally designed by Frankie Brown. This version was intended for Jumbo gauge loom measuring 1 1/2″ center to center peg with a peg circumference of 2 1/2″, specifically the Zippy loom from KB. A video tutorial was made and will show techniques in the following pattern (http://youtu.be/gL10sl04TBk).

Please take a look at Frankie’s charity close to her heart to honor her giving free patterns! The Children’s Liver Disease Foundation. Knitters can donate by going to www.justgiving.com/frankiesknittedstuff. It’s a great cause and you can leave a note for Frankie on the page when you find out more. Thanks so much!

ATTENTION 10 stitch blanket knitters! Kelly Highland- Einhorn, from our GKK Loom Knit Club on Facebook, has created a super helpful Checklist to use as you knit. 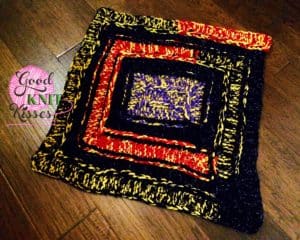 Use appropriate yarn for loom gauge (or hold multiple strands as one as needed).

[For alternate loom to try that gauge used two pegs as one on a 31 peg loom for the five stitch blanket.  So use 10 pegs for a 5 stitch blanket.  The 31 peg loom used in the sample is a knotty Knitter with a regular C2C peg spacing of 11/16″ LG Large Gauge or use similar loom. Yarn used in other test sample was Super Bulky acrylic- Premier Yarns Mega. Super Bulky 6.  Thank you to Heather Clark DuLuard for her feedback and valuable contribution! Her width is a snitch under 3″ for 4 stitches and 9 ridges are about 5 1/4″, so just a small variance under the zippy with a Super Bulky Yarn.]

Use favorite Cast on, with working yarn ending at desired peg 1.

Five Stitch Blanket will work up as a rectangle with directions below. Change in brackets [ ] use for a square blanket.

S – Slip stitch (Skip this stitch; do NOT wrap the peg. First stitch is a turning peg & not worked; To slip in the middle of a row, do not work the stitch. Simply run working yarn behind the pegs and work next peg as called).

HS – Half stitch (end peg and end of row to imitate a chain on edge of panel; bring working yarn around back of peg, around last stitch to front on top and knit over.)

W&T – Wrap & Turn (Pick up this stitch, place working yarn behind peg and bring yarn to front. Place stitch on same peg. Change direction to “turn” and work in the opposite direction; this is a short row technique).

Pick up & Knit – Pick up chain stitch from edge and knit. (This will be done on Peg 6 of this pattern).

Pick up & Place Corner – This technique note is NOT used on first double corner only but on all corners after; including 1st cast on corner to have a clean join. (Note this is a method from Charity’s advice and is not written in the original or “revisited” pattern).

Rows 3 – 18, repeat rows 1 and 2 until you have completed 9 garter ridges [10 rows total or 5 garter ridges for a square blanket alternate].

Work Corner Part 1 & Corner Part 2, two times total to make a Double Corner. This is the only time you’ll do this. (see instructions below for Corners Row by Row)

Work back along the side of the original garter ridges attaching your strip as you go following a two row pattern (The “pick up & knit” will be picking up the chain from the edge onto peg 6):

Your next steps are:

That’s it! Now just keep going until you are bored or run out of yarn.

When you are ready to end, just do a basic bind off. (TIP: To finish with bind off lined up straight with corner edge; knit until the last stitch before making a corner and start bind off from here. This is when you are at a “pick up & knit” then PSSO. Start bind off. Right handed will bind off to the left and vice versa.)

Depending on where you decide to stop, the finished blanket will be a square, a rectangle, or neither of the above with a sticky-out bit on one side. This is nice and easy knitting with an occasional corner to keep you interested so have fun with it.

Weave in tails and enjoy your Five Stitch Blanket!

Row by Row Instructions for the Corner

Row 9: Slip, Knit peg 2 (lift all 3 loops over as one; PLACE MARKER on stitches knit – pick up last two stitches, behind the peg, and place closable marker around these two stitches together as one. This marks the “Pick up & Place Corner” used later on Row 1 of Corner Part 1), Wrap & Turn peg 3

Watch the full tutorial below!

Enjoy your Five Stitch Blanket!  We’d love to see your project on Ravelry, send us a message or let us know so we can feature your work 🙂

Note Affiliate links in blog with coupons for GKK Fans.