“Why are my stitches twisted this time when I’m sure I did the same stitch pattern?  How can I make a less dense double knit panel?”  If you’ve ever done any double knitting on your loom, you already know that a few changes in how you wrap can result in drastically different fabric.  It’s time to take the guesswork out of double knitting.  My loom double knit stockinette stitch comparison video shows you six different ways to wrap your loom plus what the end result looks like.

Stockinette stitch is the most basic of all the knit stitch patterns.  In it’s simplest form it is all knit stitches that form columns of “V” shaped stitches in neat rows on both sides of the fabric.  With a few variations in how you wrap your loom and whether or not you slip your stitches you can create a wide variety of textures and looks in your finished project. 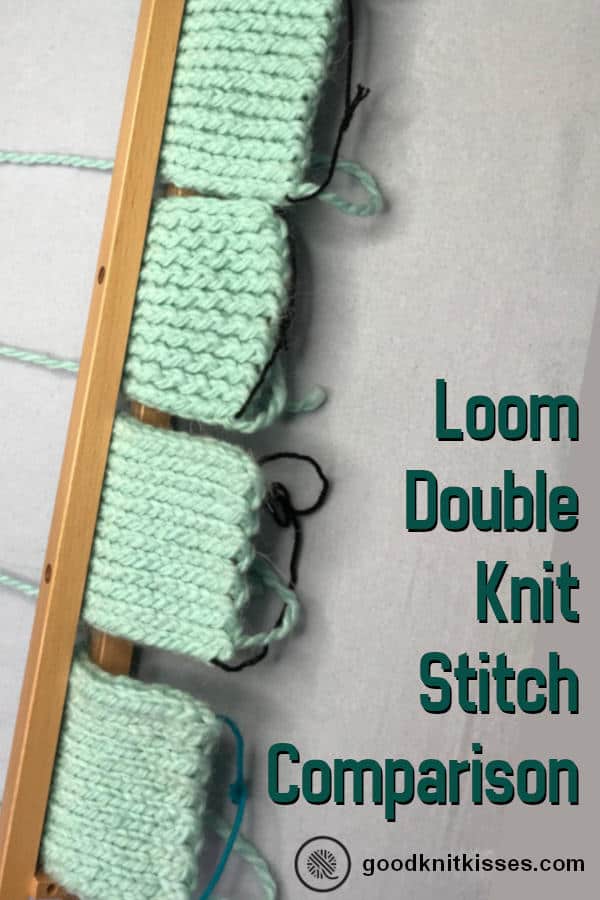 There are several minor changes that affect your fabric and for each style of double knitting we’re going to look at three of them.

This is almost identical to the Stockinette Classic except you ewrap the pegs.  The result is a similar fabric, but instead of a “V” shaped stitch your stitches will have the telltale “Y” shaped you see with an ewrap stitch.  This fabric is also dense and tight, but the ewrap makes it a bit looser than the classic version.

When you hear figure 8 this is probably the stitch pattern that comes to mind but actually what you may have been doing is #4 below, the “Stockinette Twisted Figure 8” or “Twisted Stockinette).  In the true Figure 8 the individual stitches are visibly twisted and appear to lean left and right on alternate rows.  The fabric is stretchy and less dense (not as thick) than the stockinette classic or ewrap. It doesn’t let much light through between the columns even when stretched unlike the Twisted Figure 8 that most people use. A purl stitch can be seen between the knit columns due to the wraps lining up when the fabric is stretched side to side; you don’t see the ladder yarns between like the twisted figure 8.  This imitates a brioche stitch.  A brioche is a squishy, stretchy stitch pattern with stitches tucked behind one another from slipping stitches on needles throughout the row. However in loom knitting we don’t have to slip all those stitches to get the look, so cool!

When comparing to needle knit, you really could or should call this a Twisted Brioche because the individual stitch is twisted (ewrap).  However most brioche patterns wouldn’t twist the stitch (also called ktbl or knit through back loop) unless there was a nubby texture needed with the Y shape it forms.  To knit a more traditional brioche see Duplicate Zigzag below on #6 for the class V shaped stitch in stead of a Y.

Note: Why am I explaining so much? Unfortunately loom knitting uses it’s own nicknames, contributed by lots of well meaning and awesome loom knitters through the years. The terms don’t always follow needle knitting terms which can make it confusing when reading patterns and researching on your own. We are including more terms here so you can have more info at your fingertips for your own project. Additionally, because the word “twisted” is overused here let’s call this the true Figure 8 or Twisted Brioche in the future when possible.

This is the traditional double knit that many of you are familiar with.  (Read all notes in #3 above for the Figure 8 or Twisted Brioche). The Stockinette Twisted Figure 8 is a modified version of the Figure 8.  In this case when you wrap the pegs your working yarn does not match the pattern from the previous row.  This is because you are not slipping the first stitch in the row.  This stitch pattern is unique because the fabric is not exactly the same on both sides.  The front is tighter than the back so the twisted stitches are more pronounced on the back. When working this stitch we suggest marking one side of your loom “front” and knit over this side of the row first each time in case you put it down and forget.  (You can try and alternate which side you knit first, to offset this tension issue, but I’ve found it easier to simply mark the loom than remember which side I knit off if turning the board around and round). This is the only one of the 6 listed that is not reversible.

Downside: Fabric is not reversible. Between the knit columns there is more open spacing as you can see the ladders between the stitches. Twisted stitches use more yarn; for alternate use the Zigzag stitch (#5 below).

The Zigzag stitch makes a very pronounced pattern of stitches that lean left and right on alternate rows giving an eye-catching texture.  The Zigzag stitch patterns are not actually a stockinette stitch at all.  They do, however, appear like stockinette so I’m including them in the comparison. (Benefit: Use the Zigzag if you want to use less yarn and love the look of the twisted figure 8. Both sides will look the same in the looser Y shaped fabric.).

Downside: Between the knit columns there is more open spacing as you can see the ladders between the stitches; for alternate use the Duplicate Zigzag stitch (#6 below) which will eliminate ladders however the look will change stitch look dramatically.

If you’ve heard the term brioche in needle knitting this is the loom knit equivalent.  It makes a very stretchy double knit fabric almost like a dense ribbing.  When you use two different colors of yarn you can make a double knit fabric that reversible with one color on one side and one color on the other.  This is the technique I used in the Loom Knit Brioche Accent Cowl which actually uses two colors and in the round.

Benefits: This stitch has the most flexibility of the stockinette looks for playing with color and designs.

I hope this comparison helps you choose just the right stitch pattern for your next project!  Be sure to watch the full video below to see the stitches side by side and learn demos of how to wrap each stitch pattern.

Yout videos have helped me a lot

Hi Kristen: I'm trying to find a loom hook that is not made of metal. I know knitting needles are allowed on domestic and international flights but I can't find any information on loom hooks. Do you have any suggestions or ideas? Thanks - Amy

I had no problem taking a loom hook on a flight from East to Wast coast. USA. It’s allowed.

I would like a video on knitting a pullover sweater in the the round on a noble knitter. I have the 100.

Hi Kristen: I'm trying to find a loom hook that is not made of metal. I know knitting needles are allowed on domestic and international flights but I can't find any information on loom hooks. Do you have any suggestions or ideas? Thanks - Amy